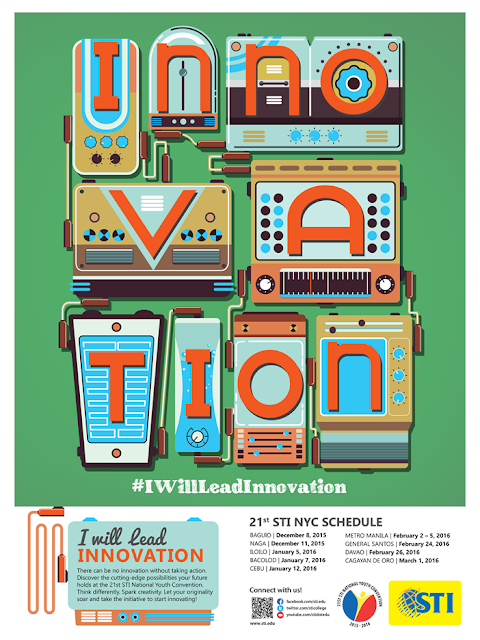 After a series of successful stops in Baguio, Naga, Iloilo, Bacolod, and Cebu, the 21st STI National Youth Convention (NYC) is now happening in Manila! From February 1 to 5, 2016, more than 25,000 STIers from Metro Manila and nearby cities will gather at the Aliw and Star Theatres, Star City Complex, Pasay City.

With this year’s theme #iWillLeadInnovation, the STI NYC inspires creativity and modernization among young innovators which they need in today’s competitive fields. Aligned with STI’s multiplicity of programs in different areas, the convention will discuss topics that are relevant in various industries.

The event will open with the topic “#iWill Lead: The Innovator’s Character” which looks into the ideal innovator — his qualities and attributes. This will be followed by a talk that focuses on the variety of tools an innovator can use to become creative and constructive with the topic “#iWill Innovate: The Innovator’s Creativity.” The session will conclude with “#iWill Rise: The Innovator’s Spirit” that aims to stimulates the students’ flexibility to the ever-changing world, especially with the challenge of the ASEAN integration that provides more opportunities on a global scale.

The 21st STI NYC will also be travelling to different cities and provinces in the country including Green Leaf Hotel in General Santos City on February 24, and CAP Development and Convention Center in Davao on February 26. It will culminate on March 1, 2016 at the SM City Cagayan De Oro.

The STI NYC is an annual convention that spans for more than 20 years now where thousands of STI students nationwide expand their knowledge in their chosen fields straight from the industry professionals. This is part of their training to become job-ready and life-ready to meet the demands of the constantly growing professional world.
at January 29, 2016