I can’t but God can , Kuya Kim 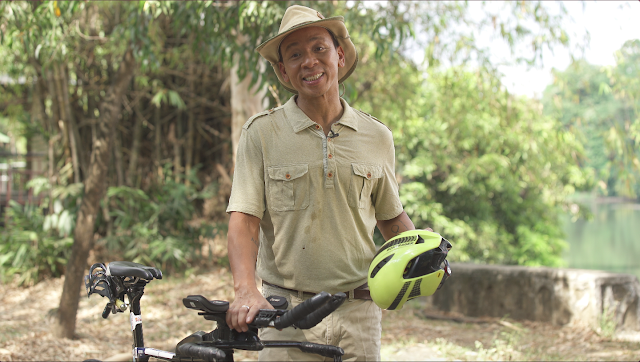 In 2013, Kim Atienza, often referred to as Kuya Kim, was diagnosed with Guillain-Barre Syndrome, an autoimmune disorder that causes paralysis and loss of reflexes, during his training for his supposedly first full Ironman in Australia.


“In the middle of training, I realized that I could not move my hands. They were paralyzed. The next day, after my run program, I could not wiggle my toes. I went to my doctor, and I was told that I have Guillain-Barre Syndrome,” said Atienza.


Atienza was told that he could’ve been totally paralyzed if he was not diagnosed early. He took it as God’s blessing. According to him, he went to the hospital to seek medical attention, which prevented the condition from aggravating.


“I saw something positive in it because it changed me. I realized that the motto of Ironman is I can. While training for my first full Ironman, I kept on telling myself that I can do it. But that afternoon, in the ICU, when I could not even move my hands and feet, I realized that I can’t. I knew, right there and then, that there’s nothing I can do; it’s only God—God can. So, I changed my motto and, it became God can because of that experience,” he added.


Taking control of his health


The TV personality shared that the condition is self-limiting. “It will heal itself but, you have to take the medicine. It’s called IVIG Immunoglobulin. I was in the ICU for more than a week,” he said.


More than healing the autoimmune disorder, Atienza explained that it is very important to avoid it by strengthening your immune system.


When Atienza was younger, he admitted to being haughty, thinking that he’s a great guy and that everything is within his power. But, this perspective changed when he got sick. He explained that there were two turning points in his life. The first was in 2010 when he suffered from a stroke and then, in 2013 when he was diagnosed with Guillain-Barre Syndrome.


“Suffering from a stroke made me physically born again. It made me decide to become an athlete, a marathoner, a triathlete, and an Ironman because I was so afraid that it will happen to me again. I became so healthy,” he said. “But, at the fittest point in my life, when I was the healthiest Kuya Kim I can be, I got paralyzed. Yun pala God had a plan for me. The plan was for me to be spiritually born again. I accepted Jesus Christ as Lord and Savior and the Source of all my power—I can’t, but only God can,” he said.


Atienza also shared that it is important to trust God, and believe that all things work well for those who love him, and those who obey his commands.


“Sometimes, when we’re sick. We think that it’s a catastrophe. It’s something that is so bad that we’ll be ruined or that our life will go down the drain. That’s not true. When we’re sick, think of it as if you are driving a car and you can’t see 10 meters ahead because it’s foggy—that’s your sickness—and you think that you’re going nowhere,” he said.


Atienza is a regular user of Santé Barley, the certified organic barley grass from Santé New Zealand. Santé believes in helping people live better lives so they can be more than they can be for themselves and their loved ones. Thus, allowing them to live more and do more.


To know more about Santé and its other products, visit their website at https://main.santebarley.com.