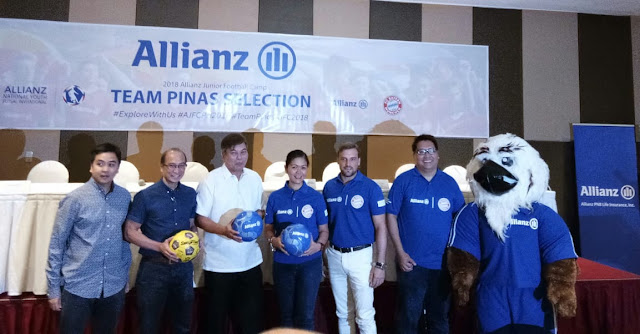 MANILA, Philippines, April 25, 2018 -- The road to a dream training in Munich begins at the 2018 Allianz National Youth Futsal Invitational (ANYFI), which fires off later this month.

Staged by Allianz PNB Life Insurance, Inc. in partnership with the Henry V. Moran Foundation and in coordination with the Philippine Football Federation (PFF), the ANYFI provides the venue for Filipino youngsters to showcase their skills and vie for slots at the Allianz Junior Football Camp (AJFC) for training with Bundesliga champ FC Bayern Munich.


Featuring the 12U, 14U and 16U age brackets for both boys and girls, the ANYFI kicks off with the local eliminations from April 27 to May 13 in nine areas progressing into the regionals from May 19 to 27 and finally the national finals from June 2-3 in Sta. Cruz, Laguna.


A total of eight deserving kids from this tournament will be chosen to join counterparts from other Asian countries in the AJFC in Thailand in July. From here, three will be selected to go to Munich in September for the ultimate experience of training at Bayern’s home city and seeing their idols live at the Allianz Stadium.
“We’re very pleased to be part of this worthwhile national initiative. Through the ANYFI, we’re giving kids the chance to get the best training possible with Bayern Munich and help them pursue their dreams of becoming professionals and national team mainstays someday,” said Allianz chief operating officer Alex Grenz.


The 2018 ANYFI follows up the successful initial staging last year. After a well-attended and competitive elimination and finals, five standouts were selected to represent the Philippines in the AJFC in Bali, joining counterparts in seven other countries in sessions with Bayern greats Giovane Elber and Klaus Augenthaler. Two of them, JM Mitra and Aeron Tenollar were later picked for the AJFC World Camp in Munich.
The locals eliminations are set in Iloilo (April 27-28), Dipolog (April 28-29), Baguio (April 30-May 1), Metro Manila (May 5-6), Naga (May 4-5), Bacolod (May 16-17), Cebu (April 27-29),  Davao (May 5-6), and Cagayan de Oro (May 5-6 and May 12-13).


The Allianz Group is a global financial services provider with services predominantly in the insurance and asset management business. 85 million retail and corporate clients in more than 70 countries rely on our knowledge, global presence, financial strength and solidity. In fiscal year 2015 over 142,000 employees worldwide achieved total revenues of 125.2 billion euros and an operating profit of 10.7 billion euros. Allianz SE, the parent company, is headquartered in Munich, Germany.