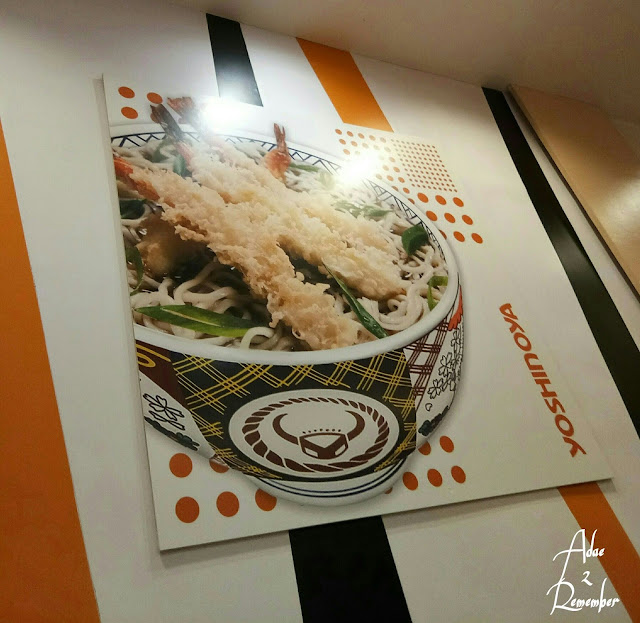 Weekend is family day to The ANG FOODIE Family.  Last Sunday after church, we decided to visit Yoshinoya in Glorietta, Makati.  We love different cuisines and we definitely love  Japanese foods.
Most people thought of Japanese foods as pricey.  No, not with Yoshinoya! We have our favorites here!  Starting from the Little Ang, she's a number 1 fan of Tempura, while Mr. Ang is an avid fan of Gyudon! Of course, Mrs. Ang eats almost everything Japanese!
Let's start with the appetizer. This healthy Kani Salad is good for sharing. It's a new thing from Yoshinoya!  The fresh crunchy lettuce and everything in it blends well.  A foodaholic's simple choice to start the meal.
Our young foodie also love noodles. And this beef ramen is so good.  The egg noodles were cook to perfection. Why do I have to mention that?  Because I have tasted different kinds of ramen from different places.  Unfortunately, most of them failed me.

﻿
A platter good for two or three!  It would actually depend on your appetite.  The beef and the tempura are served with vegetables in the middle and is under the bed of rice.  My Mr. Ang is a heavy eater, he can definitely manage this plate alone.  The tender beef gyudon taste so beefy specially if you'll sprinkle the seven spices.
Yoshinoya's delectable tempura can actually compete with some high end Japanese restaurants.  My young foodie daughter can finish at least two orders of tempura meal.  Definitely fresh shrimp and deep fried to golden brown. She eats it without the dip. That's how good this tempura is.


﻿
Next to gyudon, Mrs. Ang's pick is none other than beef stew. You'll never go wrong with the tender beef served with thick sauce. A rice topping good enough for a hungry queen.
﻿
I am a mushroom lover. This shitake siomai can make me ask for more. How I wish they can offer an eat-all-you can siomai here.

Aside from tempura, our young foodie's next favorite is Katsudon.  She can finish a bowl of this one.  Katsudon is a popular Japanese food, a bowl of rice topped with a deep-fried pork cutlet, egg, vegetables, and condiments. The dish takes its name from the Japanese words tonkatsu and donburi, according to Wikipedia.


And here's for dessert! The green tea ice cream for Mrs. Ang and the Tiramisu for Mr. Ang. Yes of course we do share. 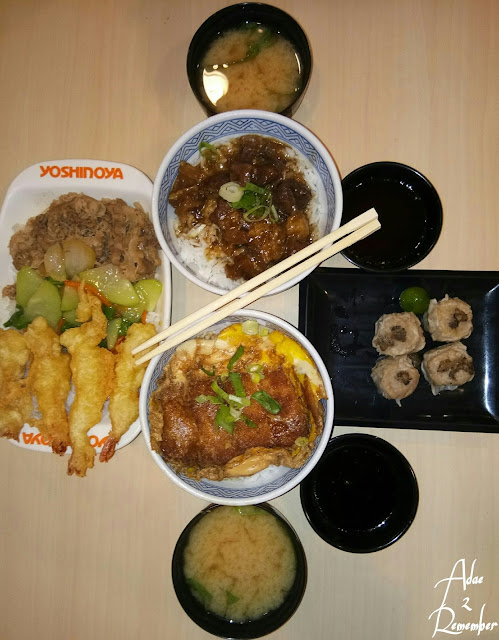 The ANG FOODIE Family is a fan of Yoshinoya! We get the value of our money with the quality and satisfying meals of reasonable prices. Try it here too!

"Japanese food doesn't have to be so expensive, it's got to be Yoshinoya!"


Yoshinoya serves Japan`s famous Beef Bowl known as Gyudon. In 2002, this Japan`s favorite was brought to Manila for the Filipinos to take pleasure. Visit Yoshinoya at any of the branches and try the variety of dishes that have a uniquely appetizing taste with value for money.

Yoshinoya has grown to be one of the most important brands in Japan and boasts of more than 1,000 outlets, making it one of the biggest fast-food chains in Japan. To date, there are more than 1200 outlets around the world, namely Japan, USA, Hong Kong, China, Singapore, Malaysia, Taiwan, Indonesia, Thailand and the Philippines. Century Pacific Group under its retail arm, Yoshinoya Century Pacific, Inc., entered into Franchise Agreement with Yoshinoya International Co., Ltd in 2001 and started its first store operation in December 2001.