I was so privileged to finally witness one of the most exciting awards nights. The archipelago’s most prestigious industry awards for real estate excellence has revealed this year’s winning and highly commended companies
It was indeed a memorable evening honouring the finest in Philippine real estate at the fifth annual PropertyGuru Philippines Property Awards 2017, presented by Kohler, held on Thursday (4 May) at the Fairmont Makati ballroom.
﻿﻿
Not much of surprise, as I was guessing who will be the best this year, I already have them in mind,  Megaworld Corporation picked up its second consecutive Best Developer trophy, plus eight other gongs and special awards, and a mantle of 17 Highly Commended honours, out of 25 nominations – the most for any developer this year. 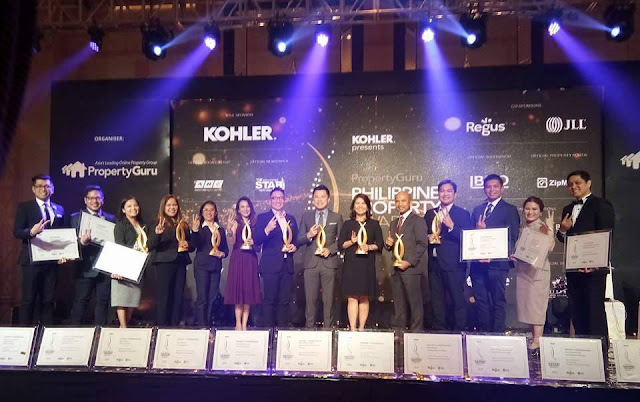 “The blueprint for Megaworld’s success is not only apparent in its pioneering integrated urban township concept that’s been perfected for many years, but also in its dedication to nation building by introducing the world-class developments in provincial areas,” said the 10-member judging panel led by JLL Philippines chairman Lindsay J. Orr.
Citing that Megaworld projects are aesthetically pleasing, sustainable and environment friendly, the panel said that “the company in the past year has excelled in producing some of the industry’s best designs and commercial development, earning once again the distinction of being the year’s Best Developer.”
One of the recognitions for the Dr Andrew L. Tan-led conglomerate is Best Universal Design Development, a new category this year that was awarded to its low-rise project St. Moritz Private Estates, which has been noted for promoting cosmopolitan features underlined by Filipino ethnic accents, as well as top-of-the-line amenities and recreational facilities that cater to all age groups and families.
﻿﻿
From Cebu, AppleOne Properties Inc collected the award for Best Condo Development (Cebu) for AppleOne Banawa Heights, which received a Highly Commended honour last year. Further development has allowed the project to compete again this year. According to the judges, the project also introduces many firsts for Cebu, including its nature-centric approach to development, 70 percent open space, keyless entry, and a total of five swimming pools and three gymnasiums at the development.
Further down south, Damosa Land took home the gong for Best Residential Development (Davao) for the “functional and innovative” Damosa Fairlane, beating another Damosa project in the same category. Damosa Fairlane’s outstanding feature is the various “pocket parks” throughout the property and open, green spaces that evoke residential communities in the 1950s.

“Although Manila remains the heart of the real estate industry, quality developments can now be found everywhere in the country,” said Terry Blackburn, founder and managing director of the PropertyGuru Asia Property Awards, in his opening remarks.
“As well as residential development giving more and more Filipinos the chance to own their own home for the first time, economic growth continues to be supported by world class retail and office developments,” he added.
With an abundance of BPO office buildings in the country, Best BPO Office Development awardee Scape by Prince Allumer Development Corp stood out against the competition for incorporating many green elements and resource efficient amenities.
Implementing a well-planned “garden mall” concept, Robinsons Galleria Cebu by Robinsons Land Corporation, winner in the Best Retail Development category, was rewarded for highlighting Cebu’s memorable sceneries through its glass façade and green spaces throughout the project.
Robinsons Land Corporation collected several other special awards, including a Special Recognition in Sustainable Development that it shared with green boutique developer ArthaLand, and an honour for its company president Frederick D. Go, who has been chosen by the editors of Property Report magazine as the 2017 Philippines Real Estate Personality of the Year for “leading the company that transforms people's dreams into reality through real estate projects that last generations.”

“We want to leave a legacy of having improved the quality of life of everyone we have touched in our businesses, whether they are a mall customer or partner, an occupant in our office buildings, a hotel guest or a homeowner,” Go said on behalf of his firm. “We are building the business of building dreams and making life better.”
A total of 29 Winners and 35 Highly Commended recipients were announced during the exclusive black-tie ceremony that recognised established and up-and-coming developers from Luzon, Visayas and Mindanao that are increasingly paying more attention to green features and sustainability.
The main category winners in the Philippines are now advancing to the seventh annual PropertyGuru Asia Property Awards grand final in Singapore this November at the Sands Expo and Convention Centre, where they will compete with 15 other markets in the region and be crowned the “best in Asia.”


Presented by title sponsor Kohler, PropertyGuru Philippines Property Awards 2017 gala dinner was attended by around 250 key industry figures and government VIPs, including Department of Tourism Secretary Wanda Corazon T. Teo, who acknowledged the contribution of the real estate sector to the growing tourism industry and importance of sustainable development in her keynote address. Other officials in attendance were Tourism Undersecretary Alma Jimenez, and Atty. Amado Valdez, chairman of the Philippine Social Security System. Television personality Issa Litton was the master of ceremonies.

BEST OF THE BEST


WINNER: The Royalton at Capital Commons by Ortigas & Company


WINNER: The Florence by Megaworld Corporation

Real Estate Personality of the Year


About PropertyGuru Philippines Property Awards:
Returning for a landmark fifth year on 4 May 2017 at the Fairmont Makati, the PropertyGuru Philippines Property Awards is part of the regional Asia Property Awards programme established in 2005. With a professionally run awards system supervised by BDO, the world’s fifth largest auditing and accountancy firm, the Philippines Property Awards is the biggest and most credible industry awards in the archipelago, with the top and emerging names in real estate celebrating the best developers, projects and design in Mega Manila, Cebu, Davao and emerging resort destinations.
About PropertyGuru Asia Property Awards:
The PropertyGuru Asia Property Awards are the largest real estate events in Asia, playing host to annual gala dinners for up to 600 C-level executives and leading industry figures from Singapore, Thailand, the Philippines, Malaysia, China, Hong Kong, Macau, Vietnam, Myanmar, Indonesia and Cambodia. The Awards programme has an unparalleled reputation for being credible, fair and transparent, with an independent panel of judges and trusted awards supervisor. Originally launched in Thailand in 2005 at the height of Asia’s property boom, the Asia Property Awards in 2016 became part of PropertyGuru, Asia’s leading online property group. In 2017, the awards scheme was expanded to include categories for Mongolia, Laos, Sri Lanka, India and the Maldives.
About PropertyGuru Group:
PropertyGuru Group is Asia’s foremost online property company. Voted by consumers in 2016 as ‘Asia’s Most Influential Brand for Online Property Search’, PropertyGuru helps over 16 million people find their dream home – every month.
Headquartered in Singapore, PropertyGuru.com.sg was launched in 2007 by two entrepreneurs. They had a vision to simplify the property search process and help renters, buyers, sellers and investors make confident property decisions – faster.
Today, it has grown from being a media company to a high-growth technology company. Beyond operating a suite of No.1 property portals and award-winning mobile apps, the Group also manages a host of industry-leading property offerings such as publications, events, awards and a project marketing technology platform – across eight countries in Asia.
For more information, please visit www.propertyguru.com