Lack of awareness is making emergency contraception an underused weapon in fight against teen pregnancy: Surveys

New survey research indicates that a lack of awareness of emergency contraception is holding it back as a weapon for combating the Philippines’ rising adolescent pregnancy rates.

President Rodrigo Duterte declared prevention of teen pregnancies a “national priority” in June, issuing an Executive Order calling for measures to address the problem, including strengthening sexual education so that adolescents can make more informed decisions.

However, according to a national survey of unmarried women aged 18-29 who are sexually active, only 1 in 4 were aware that it’s possible to prevent pregnancy after unprotected intercourse with contraceptive pills.

To prevent pregnancy following unprotected intercourse -- which may result from sexual abuse, intoxication, or even a broken condom -- doctors may under Philippine Department of Health guidelines prescribe the so-called Yuzpe Method, an enlarged dose of combined oral contraceptive pills.

But only 13% of the 500 young women surveyed in June-July by a leading global research agency for DKT Philippines Foundation said that they were aware of the Yuzpe Method as an option.

More than two in three said they’d had unprotected sex before. The same proportion

(68%) reported having experienced “pregnancy scares” before, with the number of such scares averaging 2.7. In addition, 94% of this group of women also reported suffering negative emotional states after unprotected sex, such as fear of pregnancy, anxiety, guilt and sadness.

In a follow-up online survey conducted by the Foundation, nearly one-third (32%) of

Filipino doctors and midwives active in family planning said they weren’t aware of the Yuzpe Method. In that same informal survey in October, however, a whopping 85% of the health-care providers reported they’d had patient inquiries about emergency contraception.

First introduced in Britain in 1984, emergency contraceptive (or EC) pills have emerged as one of the world’s principal family-planning methods and are now approved for use in 149 countries.

Sometimes referred to as “morning after pills,” they can prevent pregnancy as long as 72-120 hours after unprotected intercourse, depending on type. They are most effective, studies show, if taken quickly after. Yuzpe Method has an 88% efficacy rate if taken within 72 hours.

Published international studies show that unmarried women and women in their early 20s exhibit the greatest use of EC.

“These pills fill a need when sex is infrequent or unexpected, which is often the case for people just entering their sexually active years,” said Foundation Chairman Hyam Bolande. “EC pills can provide a last line of safe defense against unwanted pregnancy when the male partner doesn’t use a condom.”

A dedicated EC pill, Postinor, was registered for importation and sale in the Philippines, but in 2001, the Bureau of Food and Drugs reversed course and canceled its approval, saying that the drug had an “abortifacient effect.”

Medical researchers worldwide have concluded by consensus that EC is contraception, not abortion, however, and no significant debate on the question exists in the global field of obstetric science. “Emergency contraceptive pills prevent pregnancy by preventing or delaying ovulation and they do not induce an abortion,” the World Health Organization Fact Sheet on the topic states.

Repeated scientific studies have shown that human conception, the starting point of pregnancy, occurs 5-10 days after unprotected intercourse. Even if mistakenly taken too late, EC pills cannot harm a fetus or end a pregnancy.

According to WHO guidelines, there are no age limits for use of EC, and any woman or girl of reproductive age may use the method safely.

Philippine births to teen mothers soared to the equivalent of 495 per day in 2019. Teenage pregnancy affects nearly 6% of Filipino girls, which is the second highest rate in Southeast Asia based on Save the Children's 2019 Global Childhood Report. 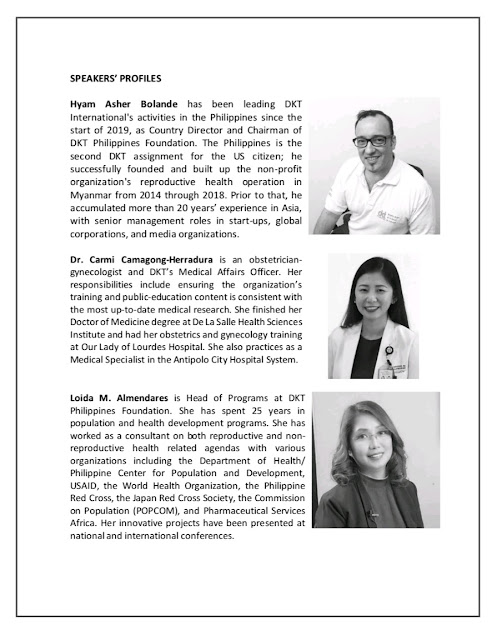 About DKT Philippines Foundation: DKT Philippines Foundation has been working to promote family planning since 1991. The Foundation provides training on modern contraceptive technology to medical professionals and public education on sexual and reproductive health, through lectures, social media, and the DoItRight.ph website. It also provides family-planning outreach to underserved rural and semi-rural communities. The Foundation is affiliated with DKT International, a Washington, DC-based non-profit organization that is active in close to 100 developing countries worldwide.