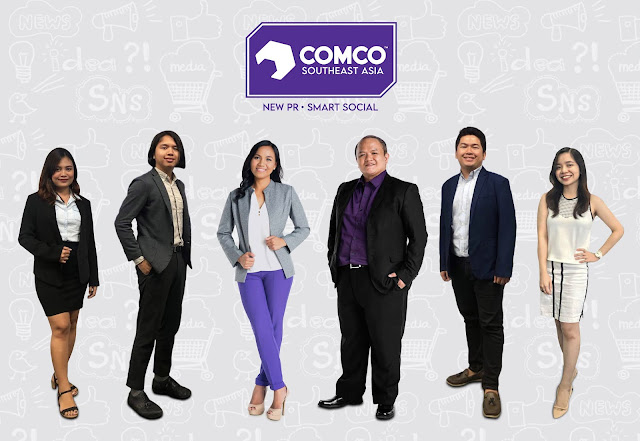 Trailblazing and global award-winning integrated communications agency COMCO Southeast Asia continues to celebrate its 5th anniversary by announcing the elevation of its pioneer and agency-honed managers to partners.

COMCO Southeast Asia’s Camp COMCO Mentorship program alumni, first hires (since the founding of the company) and homegrown talents AC Recio and Harvey Llamosa have been promoted from Associate Managers to Managers for their exemplary work in their respective accounts and fields of expertise as well demonstration of managerial qualities even at the early stages of their career. In addition, COMCO Southeast Asia, true to its thrust of Igniting Talent and vision to champion inclusive growth among its people, welcomed Mr. Recio and Mr. Llamosa as its newest partners for their commendable loyalty, excellence in their craft, sense of mission and leadership potential.

The announcement happened during COMCO Southeast Asia’s Blazing Sapphire 5th anniversary celebration alongside the launch of COMCO Middle East & Africa and the Agency’s 10-year growth masterplan including COMCO AOX League of Enterprises, the umbrella organization for the company’s existing and upcoming ventures, initiatives and advocacies. Two other homegrown talents were also promoted during the event, Queenie Resmundo from Senior Officer to Associate Manager and Patricia Rana from Senior Associate to Officer.

From Company Pioneers to New Partners

“Being one of the first hires of a relatively new agency back then, I was aware of both the opportunity and uncertainty, but as someone who has worked with Coach (Ferds Bondoy) before, I knew what kind of environment he and the rest of the team planned on cultivating and knew the promise that it had. As someone who values people and relationships, it was a joy to see young talent grow and learn in an environment that cared for them, and as the years have passed, I’ve come to realize my own growth as well. I’m grateful to COMCO for trusting me and for giving me the chance to prove myself. I’m grateful to my mentors in COMCO who willingly pass on their knowledge every day, and to the rest of the team for their support. It’s hard not to be passionate when you’re surrounded by people who love what they do. As a new manager and partner, I’m thankful for Our COMCO Squadron, for five years of meaningful storytelling, and for the many more years ahead,” shared AC Recio.

Meanwhile, Associate Executive Initiatives and Integrated Communications Manager Harvey Llamosa has been promoted to Executive Initiatives and Integrated Communications Manager. Mr. Llamosa is the Agency’s torchbearer and rockstar for New PR and Smart Social, having entrusted to him some of COMCO Southeast Asia’s biggest projects including the “Red Talks” web series and “See the World” initiative for AirAsia, “Fun First Move” and “Screenbites” for M&M’s, “Reel to Real” campaign for SM Cinema, “Earth Hour” and “#AyokoNgPlastik” movement for WWF, “Social Innovation Challenge” and “One Voice for Children” for World Vision, and influencer marketing projects for Lenovo, among others. Mr. Llamosa also takes the lead in COMCO’s Corporate MARCOMAX or Marketing, Communications, Advocacy and Excellence projects.

“Five years ago, I’ve decided to start my journey with COMCO Southeast Asia. And through the years, the company has honed my skills and trained me to become the PR professional that I am today. I am so lucky and grateful for the opportunity to be part of an incredible company and be trained to become one of its future leaders as well. Cheers to the five years of success, and as a newly promoted manager and partner, I am looking forward to a bigger future with our recently unveiled growth masterplan including the COMCO AOX League of Enterprises,” said Harvey Llamosa.

Other Homegrown Talents who Rose from the Ranks

“As COMCO Southeast Asia further grows, the founders of this groundbreaking communications agency are also amazed to witness how our young talents have progressed not just in their craft, but in their life’s mission through the years. Their promotion is also our proud moment as their mentors,” said Ferdinand Bondoy, Regional Integration and Chief Executive Director of COMCO Southeast Asia.

“To Queenie and Patricia, and to our new partners AC and Harvey, congratulations! COMCO SEA is proud of you all! Here’s to more achievements and greater heights, COMCOys! #OurCOMCOsquadron will always be behind you in your journey.”

COMCO Southeast Asia is a powerhouse and global award-winning integrated communications agency formed by the coalition of premier brand architects, inspired storytellers, and communication trailblazers in the region. Based in the Philippines and with affiliate network presence in Singapore, Thailand, Malaysia and Indonesia, COMCO SEA takes the lead in the innovation of premier brands and growth of up-and-coming businesses through the emerging global disciplines of New PR – a strategy based, content-driven, and channel-agnostic way of doing PR, and Smart Social – a holistic, authentic and integrated approach in the maximization of digital and social channels.

At the core of COMCO SEA is its unique brand of Meaningful Storytelling based on its corporate mantra and the mission to Ignite Brand Love, Social Change, Talent Growth and Regional Collaboration. In just 5 years, the Agency has done groundbreaking works for more than 70 local, regional and international brands including reputable development and humanitarian organizations. COMCO SEA has been awarded twice as Agency of the Year 2nd Runner-up at the IABC Philippine Quill Awards, Finalist for Boutique PR Consultancy of the Year in Asia at Campaign Asia Pacific’s PR Awards Asia, and 80 metals from various local and international award-giving bodies.