Pollution is everywhere, there are like seven types of pollution. One of which is the plastic pollution. It is a serious problem all over the world. We as individual can put this to stop by making small steps and discipline starting from our home.

“Plastic pollution is a serious threat not only to marine life but to human life as well. Plastics don’t completely degenerate and just break down into small pieces ─ microplastics ─ which are ingested by the fish that we eat. The possibility of plastics ending up on dinner plates is a serious concern and a health hazard,” said Joel Palma, WWF-Philippines President and CEO.

Uniting under the call to end plastic pollution, the World Wide Fund for Nature (WWF) Philippines, together with Ayala Malls and other partner corporations, officially launched the #AyokoNgPlastik movement at Glorietta 2 Activity Center.

With eight million tons of plastic ending up in oceans every year, the Philippines ranks as the world’s third plastic polluter of oceans. The #AyokoNgPlastik movement hopes to address these alarming facts by bringing together companies, individuals, and other sectors to minimize and eventually put a stop to single-use plastics such as straws, bags, bottles, and cups. Refusing these is a simple yet strong first step that individuals can take to commit to a sustainable lifestyle, especially since the harm that these materials cause directly affect humans.

The movement is one of the major projects of WWF-Philippines this year. Initiated by its Next Generation Council (NGC), the goal is to raise awareness and encourage individuals to live more consciously and for businesses to operate more sustainably. Introduced during the event, the NGC is made up of young movers and shakers who heeded the call to spread WWF-Philippines’ conservation thrusts. Headed by The Net Group Chair Raymond Rufino, members include television host and columnist Stephanie Zubiri-Crespi, Philux COO Stephanie Kienle-Gonzalez, Magsaysay Transport and Logistics COO Jesse Maxwell, Teach for the Philippines CEO Clarissa Delgado, The Moment Group Co-Founder and Creative Director Abba Napa, and former WWF-Philippines National Youth Council Chairperson Alexa Cancio.

"Driven by deep concern, every member of the NGC is volunteering time, energy and resources to reduce single-use plastic pollution in the country.  The challenge is daunting but we are determined and committed," stated Rufino.

Ayala Malls, one of the biggest shopping mall developers in the Philippines, has also expressed support for the movement. As part of the Ayala group of companies (recognized by the United Nations as a sustainable development pioneer), Ayala Malls is committed to driving sustainable business and living practices across their many developments.

“Sustainability has long been a priority for Ayala Malls and we’re especially proud to have the chance to continue the momentum with WWF. We launched our initial campaign in 2009, with the aim to bring focus to the importance of sustainable living, and last year we established our intent for no plastic shopping bags across Ayala Malls. We are thrilled to have found a partner in WWF for #AyokoNgPlastik campaign, as we work together for a more sustainable future for the Philippines,” said Mariana Zobel de Ayala, Ayala Malls Deputy Head.

“We’re very grateful to have a number of companies join the movement this early on. With their involvement, it makes it easier for Filipinos to veer away from plastic and choose a sustainable alternative instead. We’re hoping to get more partners to participate in this cause,” Palma remarked.

WWF-Philippines National Ambassadors Marc Nelson and Rovilson Fernandez, who hosted the kickoff event, both stressed the importance of every Filipino’s participation in the movement and how this can contribute to positive environmental change by stating how cleaning up oceans and coastlines is essential in restoring marine life and reiterating the importance of preventing pollutants from entering the oceans.

“We’re very happy to see the growing number of people interested in beach cleanups. Now the challenge we must all take is to go beyond the beach and do whatever it takes to reduce our own carbon footprint,” Fernandez said.

“The amount of trash being collected during cleanups is just unimaginable. Everyone needs to realize that our trash is never actually gone and just ends up somewhere else. We need to be responsible travelers and consumers and avoid single-use plastics and recycle what we can,” Nelson added.

If production and usage of plastic remain unchanged, experts predict that there could be more plastic than fish in the ocean by 2050. Everyone is invited to take part in the #AyokoNgPlastik movement and can find more details through WWF-Philippines’ social media pages or the official #AyokoNgPlastik Facebook group, which now has almost 3,000 members since its launch 2 months ago. 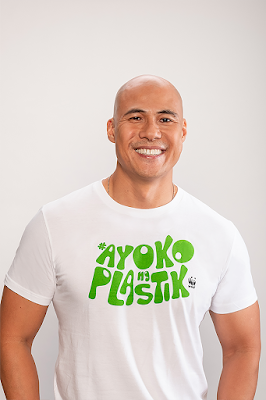 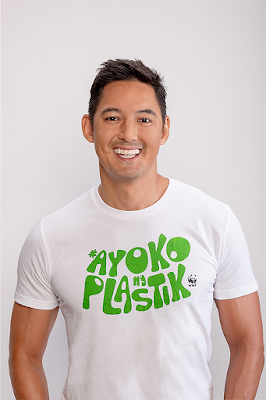 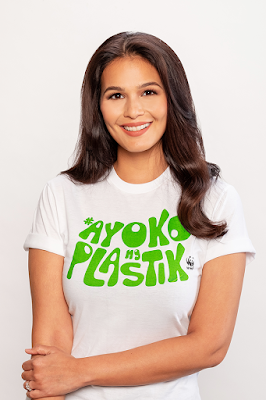 WWF National Ambassadors Rovilson Fernandez, Iza Calzado, and Marc Nelson wearing #AyokoNgPlastik shirts, which are available from October 16 to 21 at Trinoma and Glorietta

WWF is one of the world’s largest and most respected independent conservation organizations, with over 5 million supporters and a global network active in over 100 countries. WWF's mission is to stop the degradation of the Earth's natural environment and to build a future in which humans live in harmony with nature, by conserving the world's biological diversity, ensuring that the use of renewable natural resources is sustainable, and promoting the reduction of pollution and wasteful consumption.